Writing With a Side Order of Vintage Murder 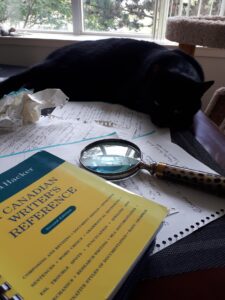 It’s been a busy summer, and I’m grateful for that. Like my mother cautioned, “Idle hands are the devil’s work.” Maybe that’s why summers were the best time when we were young, to get into all kinds of hellery. If we couldn’t do that, there were always books to be read.

Since childhood, reading has been one of my favourite pastimes. I have experimented with various genres, but always seem to gravitate toward the scary stuff; psychological drama, thrillers, mysteries, crime fiction, courtroom drama, even horror (yes, I’m a Stephen King fan from way back.)

I have self published a couple of books, first one a memoir, second one, a contemporary fiction piece. It was fun to write my own and others’ coming of age stories in a reflective format, then a novel involving people having to pull together to survive a night of cat sitting surprises.

An idea for a third book rumbled in my thoughts. Would I be able to write my own scary stuff? I had the reading experience, not much personal experience, I never wanted to be a police officer, psychologist, lawyer or murderer. If nothing else, it would intrigue me, and keep me motivated to write every day. Well, maybe every other day.

It was at a former writers’ meeting, where ten of us sat around a long table, that my idea for a crime fiction novel began to take shape. The power suddenly went out in the back of the restaurant, making it hard for us to see each other. After a few minutes of silence, we couldn’t see to read aloud any of our writing, the lights came on. My Agatha Christie moment was illuminated.

Suppose, I thought, the room had been left in complete darkness. There would be the initial exclamations of surprise, then a few whispers and possibly a strange silence. When the lights finally came on, the fellow across from me would be sprawled across his first draft of a short story, with a silver pen embedded in his neck.

The other writers laughed when I told them what I was thinking. Overall, our members were quite benign. It was true that some of us could get very lively in discussions and have opposing opinions, but murder? Then I considered, what about writers who would not know each other very well at all? What if bad things happened at a writers’ retreat over a long weekend?

So that’s what I have been working on over the last year. Not steady mind you, I threw in some practice on short stories, but I always looked forward to returning to this idea for a novel. Now I have a first draft of forty chapters and this is where the real work begins.

I’ve heard that new writers should maintain the same genre. That their readers like some predictability in their work, plus they can hone their craft this way and make a reputation. What about a pseudonym you say? Yes, that is a popular alternative, but not for me.

My book will fly in the face of all that. Some might say it’s a gamble, but isn’t any published work by a new author?

I say, move over old time memories and rescued kitty cats, there’s something sinister coming and it isn’t a pen in the neck.